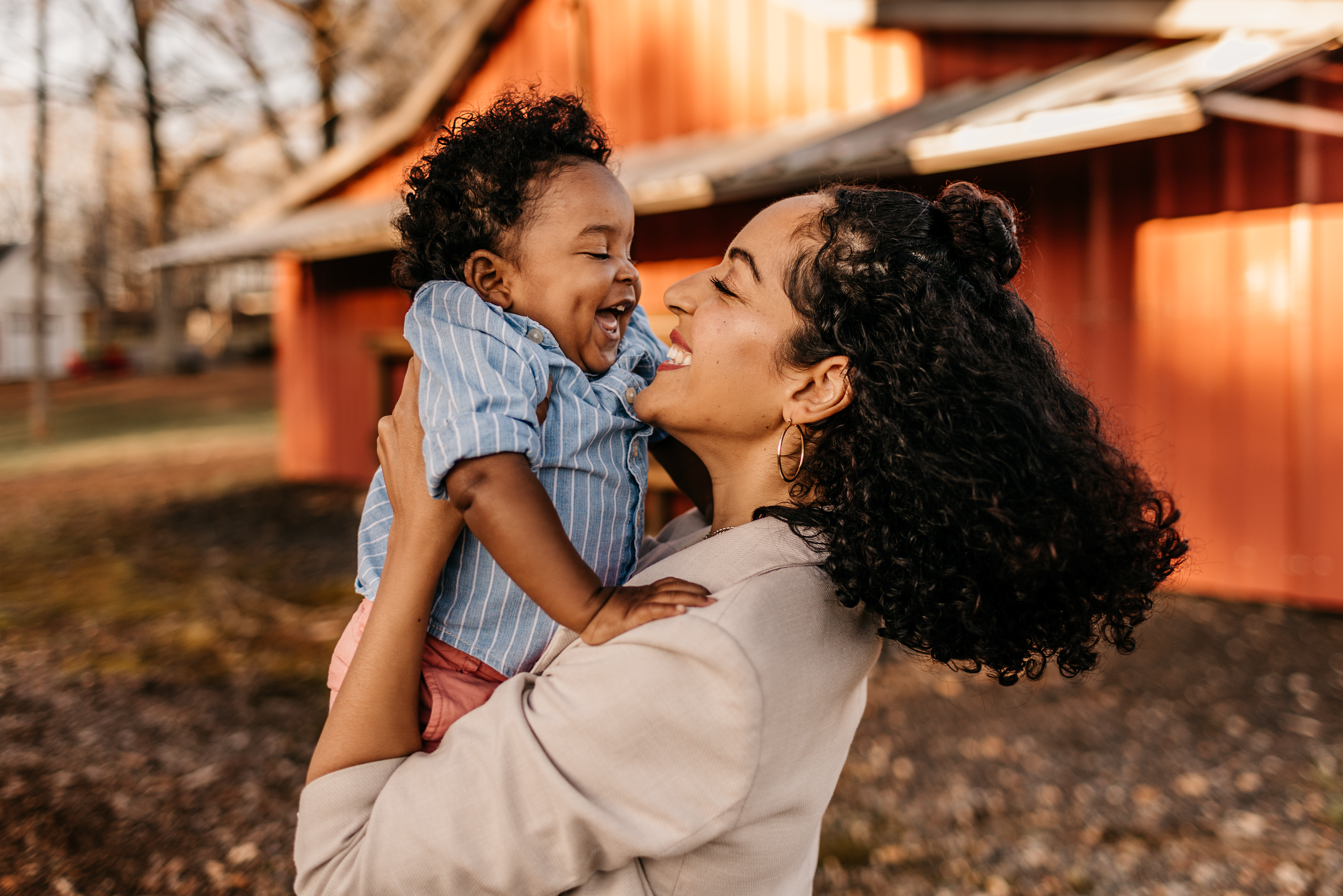 I never thought I’d be a mom. Truthfully I didn’t think I’d make a great one since kids made me cringe my whole life. I never got the warm and fuzzies when I was around babies and I didn’t see how that could ever change. But then Jan 15, 2021 happened. It was the sweet, unforgettable day my son Beyond entered this world. Let me tell you – I never imagined I could possibly be this attached to a kid. Yet here I am. Utterly. Obsessed. With. Him.

The Beautiful Reality of Human Mothers

3 years ago I wouldn’t recognize the person I am today. A whole mother. I went from not wanting to be tied down in life by a baby to not wanting to envision any kind of life without my baby in it. Being Beyond’s mom shaped me into a version of myself I’m truly proud of and I couldn’t see him as a burden even on the hardest of days.

And trust me – there will be hard days. Just the mere act of transforming into this unfamiliar identity of “mother” can feel like a whirlwind. I suddenly found myself thrust into this secret society of overwhelmed and exhausted parents. As cliché as it sounds though, it is ultimately the most rewarding experience I’ve ever had.

I’ll never forget my first act as a new mom. The nurse laid my newborn child on top of my chest so I could breastfeed him. In that moment, I realized I had no clue what I was doing, and it was a feeling that was the first of many to come on my motherhood journey.

Breastfeeding, while natural and beautiful, is not instinctive for everyone. It’s a learned skill that I was willing to master so long as I had the ability to do so. Thankfully, while confusing at first, breastfeeding eventually came as naturally to both Beyond and me as breathing. I love breastfeeding; it was, and still is, blissful— my favorite way to bond and snuggle with this little person I remarkably created. 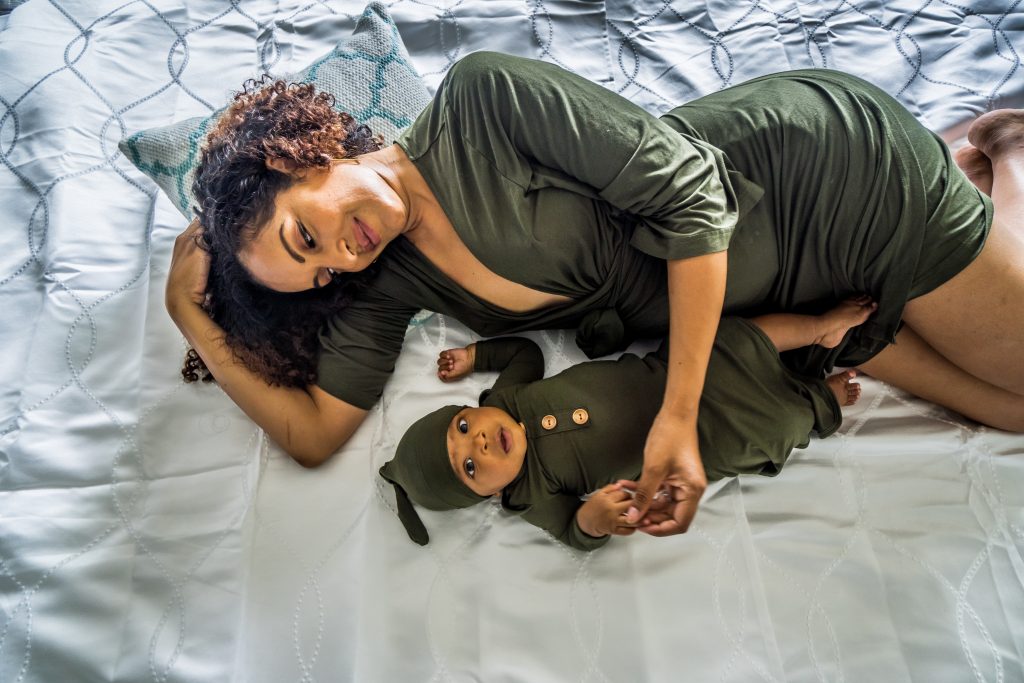 Aside from the undisputed benefits breastfeeding provides your child, it also releases oxytocin, aka the “love hormone” or “cuddle chemical” in your brain, and in your baby’s brain too. It feels phenomenal. Pumping, on the other hand, whewwww chile. My pump can kick rocks.

I remember the first time I used it. My husband helped me clumsily assemble the device. He sanitized the pump parts. We forced the suction through the tiny hole in my pumping bra. Got it nice and snug. And then I pressed the magic button. Yeah. This felt weird. I looked down and took in the odd display. The pump, the wires, the loud suction cup extracting the liquid gold out of my body into two tiny bottles so I could build my milk stash. I thought to myself, “Ugh, I feel like a cow.”

Almost immediately I felt a wave of guilt wash over me. Here I was experiencing the privilege of pumping milk to feed my child and I had the nerve to compare myself to an animal mother who is routinely robbed of that inherent right.

The Ugly Reality of Mother Cows

You see, cows are moms just like us. They carry their calves for 9 months like we do. Battle through grueling labors like we do. Miraculously push their babies out like we do. Produce milk to feed them like we do. The glaring difference between us though? Mother cows never get to experience the sacred act of motherhood like we do— because humans strip them of that right for the sake of our appetites.

Growing up, I never really questioned the dairy industry— I was raised on dairy and it was always just a part of my life. That is until 2016 when I saw a video of a mother cow chasing down the truck that had just ripped her newborn calf away from her. I’ll never be able to unsee her pitiful desperation or unhear her painful wails. My eyes watered as I made the connection that animals are not ours to exploit. I couldn’t believe I never challenged the normalcy of consuming milk that wasn’t made for us, milk for which we have no need or right— milk that was perfectly, specifically made to nourish the baby of the mother who produced it.

That day I went vegan and never looked back. The more I uncovered about the dairy industry, the more horrified I became. I learned about the inhumane conditions that cows are kept in, the routine abuse and mistreatment they suffer, and the fact that they endure an endless cycle of coerced pregnancy and birth just to have their babies taken away from them — a process that involves either being forced to procreate with a bull or being artificially inseminated in a brutal act of sexual invasion. Both scenarios occur against their will.

Now imagine if that were us. Forcibly impregnated and our babies snatched away like an episode of The Handmaid’s Tale. And then someone comes along and pumps our milk day in and day out — not even to feed our own babies, but to feed an entirely different species from us.

The Grim Reality of Mother Earth

As I continued to unpack the impact of dairy, the horrors didn’t stop with cow abuse. I then learned about how the dairy that many view as a harmless, normal part of the human diet is contributing to climate change, environmental degradation, world hunger, and health problems unbeknownst to most. It sounds dramatic, but it’s true. It’s the food system we were all born into and it’s a cruel game, calculatingly created and sustained by corporate greed and the myth of human supremacy, in which we consumers are the unwitting players who perpetrate that cruelty through our conditioned demand. Unwitting, that is, until we know.

CLIMATE CHANGE: Simply put, cows produce methane— a whole lot of it— and methane is one of the leading drivers of climate change. It’s a potent greenhouse gas 80 times more powerful at warming the atmosphere than carbon dioxide. Scientists are warning that we must focus on reducing methane emissions as quickly as possible, with the United Nations stressing the immediate need for “rapid, persistent, and substantial” cuts in methane emissions from livestock production in particular. Building on this, the leading body of global climate experts, the Intergovernmental Panel on Climate Change (IPCC), just urged in their latest climate report that a switch to plant-based diets is the single most important shift individuals can make to halt the course of climate warming and mitigate the most catastrophic disasters. In their most dire report to date on the present and future state of our climate (and thus our planet), they note:

‘In addition to climate mitigation gains, a transition towards more plant-based consumption and reduced consumption of animal-based foods, particularly from ruminant animals [cattle, goats and sheep used for meat and dairy], could reduce pressure on forests and land used for feed, support the preservation of biodiversity and planetary health, and contribute to preventing forms of malnutrition (i.e. undernutrition, micronutrient deficiency, and obesity) in developing countries. Other co-benefits include lowering the risk of cardiovascular disease, type 2 diabetes, and reducing mortality from diet-related non-communicable diseases.”

The scientific consensus is clear that swift and massive reductions in meat and dairy production and consumption play a crucial role in preventing the worst impacts of climate change.

ENVIRONMENTAL DEGRADATION:  According to WWF, 17 gallons of manure and urine are produced daily by a dairy cow. Manure emits greenhouse gasses, pollutes water and air, and damages wildlife habitats. Dairy farming also requires a lot of land, water and energy to produce. It takes 144 gallons of water to produce just 1 gallon of milk in the US. More than 93% of that water is used to grow feed for dairy cattle. Scientists say a global shift to plant-based diets would reduce global land use for agriculture by 75%. 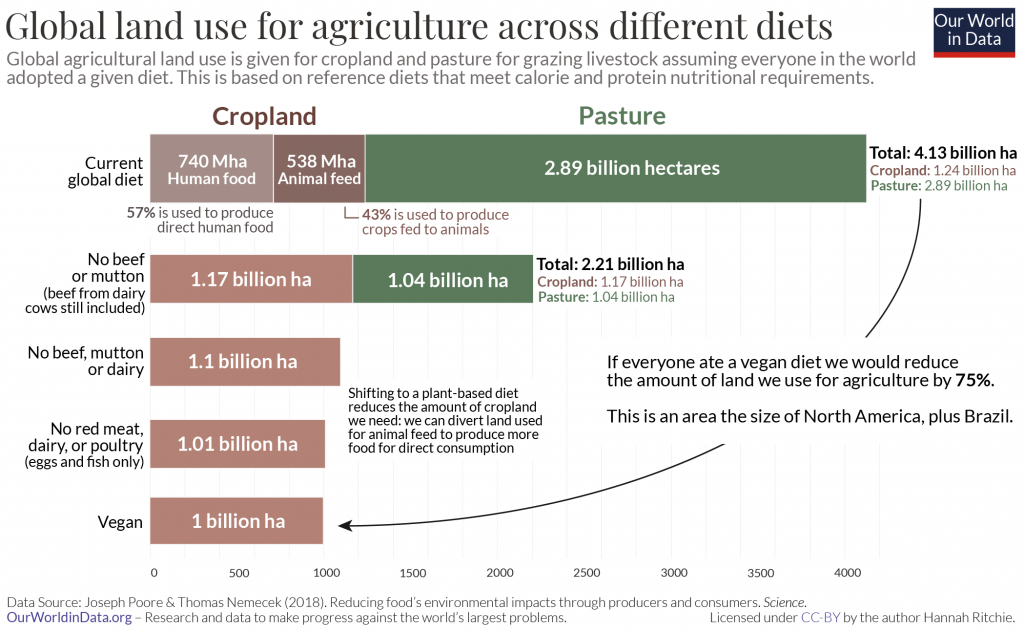 WORLD HUNGER: There are many nuanced and complex factors that play into world hunger but a significant driver of global food insecurity is the overproduction and overconsumption of animal-based foods. It’s a misconception that animal agriculture is a necessary evil to feed the population. Farmed animals consume far more calories than they produce, and this massive inefficiency is compounded by the disproportionate amounts of land, water and energy it takes to raise, feed and slaughter them. We could feed 7 billion people far more efficiently and sustainably, using far less land and other resources, by growing crops to feed people directly rather than growing crops to feed some 70 billion + farmed animals, from whose carcasses and secretions we obtain only a fraction of the original crop calories and protein. According to calculations of the United Nations Environment Programme, the calories that are lost by feeding cereals and grains to animals, instead of using them directly as human food, could theoretically feed an extra 3.5 billion people.

A Reality That Must End

We as humans can’t continue to bury our heads in the sand when it comes to the dark realities of dairy. Dairy harms people, animals, and the planet in so many devastating ways. And for what? So we can eat a cheese pizza? Have milk with our cereal? Butter our toast? The kicker is–it’s not even a necessity, despite those “Milk Does Your Body Good” lies we grew up on. We allow this abuse to continue for a food product we don’t need and that isn’t even biologically appropriate for us to consume.

Yet this is where we are. Humans–the only mammals who regularly steal and consume the baby food of another species. 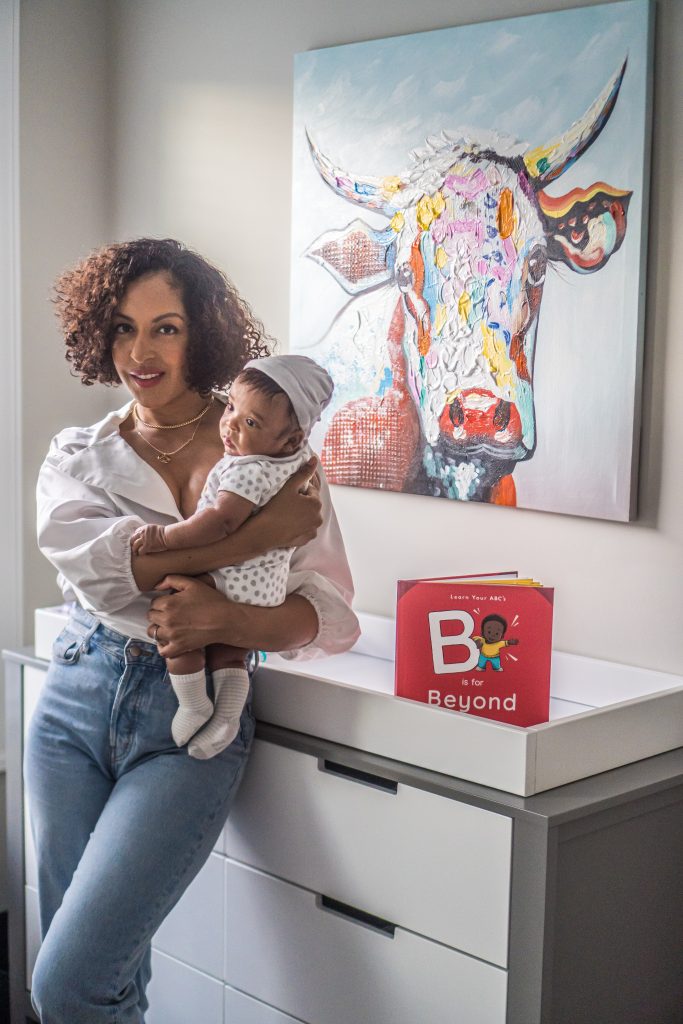 As a mom, I want a liveable planet for my son without the terrifying threats and impacts of climate change hanging over us. I want my child to be healthy. And I want other animal mothers to experience the gift not only of nourishing their babies, but also of nurturing them and living with them as a family like I do. My heart goes out to the 270+ million mother cows around the world who currently don’t have that same basic freedom— and all because of a food system sustained by our demand.

I love being a mother. But I hate the way our culture celebrates human motherhood while needlessly exploiting and destroying the motherhood of others. The disturbing realities of dairy production are completely antithetical to the spirit of mothering and to basic moral decency. I can’t support an industry that causes so much harm to both human and non-human animals and the earth we all share, especially when we have plentiful access to delicious, healthy dairy alternatives. We can’t claim to be an advanced society while simultaneously upholding an archaic, inefficient, violent and unjust food system. That’s why I’m a mother against dairy— and one who is committed to raising my kid in a way that is compassionate, ethical, and sustainable. I hope my story can inspire other parents to do the same.

Ashley Renne Nsonwu is a Black and South Asian environmental activist, vegan mom and co-founder of Hot Jupiter, a pro-planet multicultural beauty company. As an advocate for POC, the planet and animals, she shares daily tips for vegan families, full day menu ideas for vegan kids, sustainable lifestyle tips, and also documents life inside her solar-powered smart home, as well as her electric car family road trips. Through her work, she inspires her community to bridge individual action with systemic change to help end animal exploitation, protect our natural environment, and improve the health of our bodies through sustainable, vegan lifestyle changes – especially in communities of color disproportionately being impacted by environmental and health problems. Learn more at her website, heyashleyrenne.com, and join her 150k+ eco-community on Instagram & YouTube.

The Hardest Part About My Pregnancy: Daniella Monet