In February 2013, my partner and I moved to live and work on a West Canterbury, New Zealand dairy farm with a 600 head herd. My partner was the second in command on the farm, and I was employed as a relief milker and calf-rearer while starting my studies with Massey University via correspondence.

When I first started milking that year, it was getting to the last months of the season, before the cows were dried off for the winter. They didn’t have a great volume of milk at that time, and the milking would generally only take an easy 2.5 to 3 hours. I remember feeling a sense of pride, solidarity and sisterhood with the cows, honored that I was privileged to handle such a private area and process of their bodies. Except, of course, on dairy farms nothing about an animal’s body or reproductive process is respected as private or belonging to them. 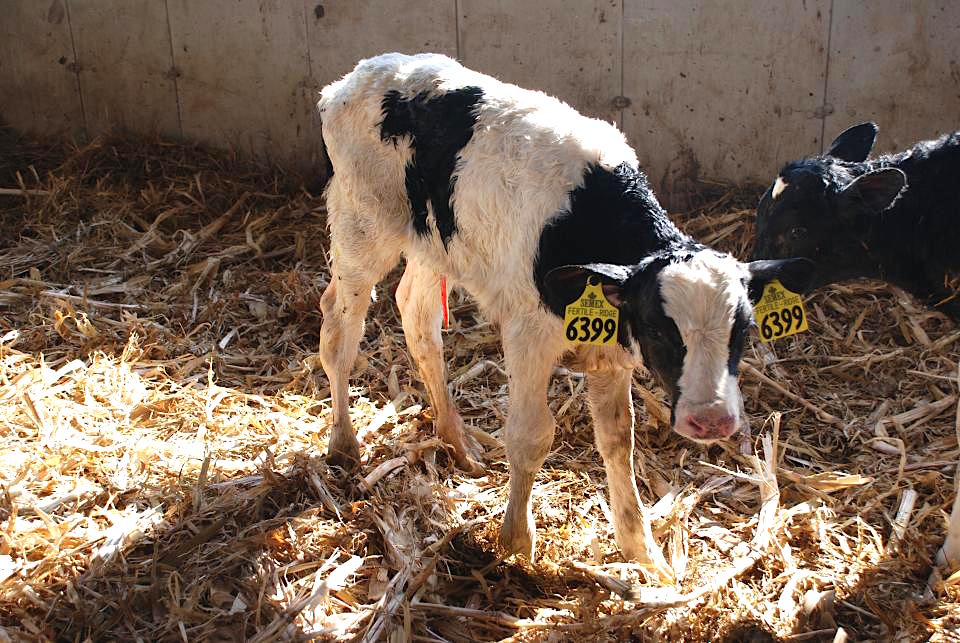 Then calving started. I knew, logically, that cows need babies to produce milk, but I’d never really thought about the fact that those babies are almost immediately taken away from their mothers. On my first morning, I stood in the freezing pens with tiny babies who looked absolutely shattered; still wet with afterbirth, bloody umbilical cords dangling. Mothers who gave birth during snow or storms had their babies taken immediately and didn’t even get to clean them first.

The tiniest babies are tube fed, which involves a tube being shoved down their throats and into their tiny stomachs, and a litre of colostrum poured in. This is traumatising to watch, and I can’t even imagine how it must feel. Their poor, tiny, soft mouths and throats that should just be suckling small amounts from their mothers while their systems are learning to work, must be so sore from the tubing.

It is not uncommon for day-old babies to have the tube incorrectly forced into their lungs and drown in colostrum within a minute or so, with colostrum pouring back out their noses. When this happens, there are many more fearful and crying babies lined up behind these, so the dead baby is thrown onto a pile of other dead ones as you don’t have time to do anything else but keep working on automatic pilot. Oh God, what I numbed myself to.

That calving season, I worked every day for more than three months almost without a day off. All the other staff were just grinning and bearing to get through their 16-18 hour days with only half hour breakfast and lunch breaks, because there is too much work to get through. This pace also contributed to the numbing effect, as did my need to believe I was a good person.

I cried every day, every single day, for two weeks while working in the freezing pens with these tiny cold crying babies who were often dying around me from disease and, I believe, heartbreak and shock.

Their confused and grieving mothers would walk past the pens from the milking shed back to their pasture, and stand at the fence and cry for their babies that they could see and hear but never touch.

It wasn’t until those first days working in the pens that I really understood where that milk I had been so proud to be taking only a month earlier was truly coming from, and the price being paid to get it. How was I so naive? So blind? So fucking stupid?!

My first morning in the pens, I knew I would never touch dairy again after what I was witnessing, and what I’d learned. But I didn’t quit working then; I still can’t explain why it took me so long to quit. I was confused, overwhelmed by the logistics of trying to start a family and not knowing how we would support ourselves… I was wrong to stay, but I did. And it kills me to say this, but over that calving season, I hardened up and shut out any thought as to what those babies were going through. It was the only way for me to survive. I would grab them by their necks between my thighs, and force them onto the plastic feeders and rubber teats. They have to be forced, as it is so foreign and unnatural to them, they have to be taught the milk comes from there, instead of from the warm body of their mother.

The milk they were fed was mostly bloody, cold milk from the mothers with mastitis, antibiotic-ridden milk that couldn’t be sold. This sick and medicine-laden milk is the milk most dairy cows and those “grown” for meat are fed on a dairy farm. They are rarely ever given milk that is healthy unless the farm doesn’t have enough “sick” milk to feed them.

I was so exhausted, not just physically, but emotionally, by this work, that I would be relieved when the Bobby truck (the truck that takes calves to slaughter) came and took some of them to their deaths, because it meant a bit of pressure taken off me at the time. I am so ashamed to write these things.

Somehow I got through that awful first season on the farm, and by March the next year it was my turn to get pregnant; finally after almost two years of trying, my partner and I conceived. I was extremely sick for the first half of my pregnancy, and I have hazy memories of standing in the dairy shed weeping with nausea and all of the smells assaulting me, struggling to stand and take the cups off the cows I was milking, because I felt so weak and dizzy… I think it was in those miserable and vulnerable moments that I first truly appreciated what those pregnant cows were being put through again.

Pregnant women can’t work with calves, as calves can harbor diseases that can kill a fetus, so the next calving season, I was gratefully relieved of any farm duties as I grew bigger and bigger… 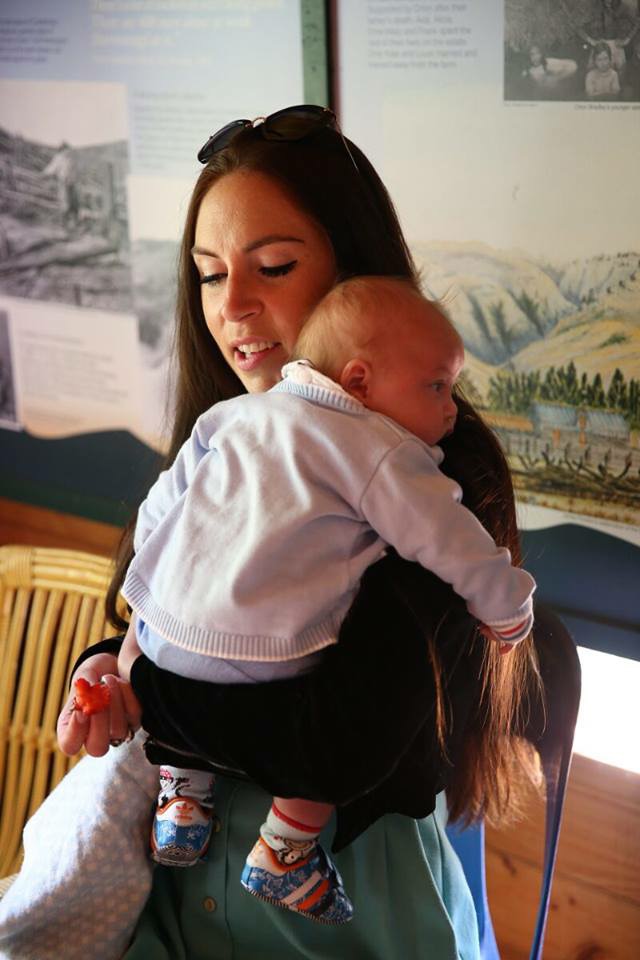 Then my son was born and the first year of motherhood hit, and I was in a whirlwind of diapers and breastfeeding and trying to continue my studies. I don’t remember being particularly aware of what was happening on the farm at that point because I was so engrossed with just getting through the day and making sure there was food on the table when my exhausted and miserable partner would stagger in from work. When you’re a “dairy wife” you’re basically a single mum because your partner is hardly ever there and when he is, he’s often irritable and just needing to eat and sleep. The day my baby was born (after a three day labour), my partner was back out milking the next day.

It wasn’t until my baby was a year and a half old, and I had begun my fourth calving season on the farm, that I woke up and realised exactly what I was living in the middle of – what exactly was paying my bills. Mothers were birthing outside my window and I was listening to their labour pains all night, then watching them loving and cleaning their babies until my partner came with the tractor and the cage and took those babies away from them forever. I almost lost my mind with grief then, I couldn’t believe what I had been so complicit in, and what evil I had been closing my eyes and heart to while I lived there.

So I was back to crying every day, and screaming at the workers and the Bobby truck drivers and telling them all they were burning in hell for what they were doing. But what about what I was doing? I became very unbalanced and suicidal at that point, and it was only through joining Facebook and finally reaching out to the animal rights community that I made it through that extremely dark time. Even my incomparable love for my son wouldn’t have kept me on this earth with the horror I had finally fully opened my eyes to, the horror I was guilty of inflicting.

I knew I had to leave the farm. I was even prepared to leave my partner of 16 years, the love of my life and father of my son, if he hadn’t also wanted to go, because I was surely losing my mind there. Luckily, he told me he too was broken and so miserable that he couldn’t do another season. He agreed we had to leave. I was so grateful, and I believe it was finally knowing there was an end in sight that helped me wholly open my heart to the devastation we were guilty of.

I became an animal rights activist at that time, and my partner and I both committed to living a vegan life.

We are now off the farm and although everyone who knew me then thought I would be celebrating our departure, I felt only shame, guilt, and sorrow in leaving. There was no celebration, no joy, because I knew I was effectively abandoning all those mothers and babies to their horrible fate. The fate that I was guilty of dealing them while I worked there and received money from their lives being abused and destroyed.

I moved to a dairy farm an ignorant meat and dairy consumer, and I left four years later a mother, a vegan and an animal rights activist who sees the world so differently now. I’m in a world of pain every time I see farmed animals (I still live in rural Canterbury, so this is every day) because to me they are dead animals walking, their lives are just a quick count-down to the stun-gun, the knife, the day they lose their babies, lose their hearts, lose their lives.

I was never an animal lover before this, but one beautiful and ironic thing that came from moving to a dairy farm and abusing cows is this huge love I now have for all animals. I’ve been truly humbled by their majesty and innocence and I wish I could protect them all, and give them the free lives they so rightly deserve, as much as any of us deserve it.

There are a million more awful stories I could relay: like terrified downed cows on the platform; young mothers sent to slaughter just because their udders are too big and it’s difficult to get the milking cups on; cows who died stuck on the platform when a storm hit and the power outage kept them trapped there, birthing their babies onto the concrete a meter below; a young cow (a heifer, not even fully grown) who laboured alone in the paddock for days and nights with a dead baby inside her, too big to give birth to it, before the vet was finally called…

I could go on and on. But the worst horror of all is how mundane and routine all this seems when you are working and living among it. And how it all goes on happening because of those of us who choose to turn away and keep consuming these products, who condemn other mothers to a lifetime of exploitation and the most unthinkable loss, all so we can steal their breast milk, their babies’ food, and for absurd practice this we steal their babies from them too. Their babies. Their bodies. Their milk. Not ours.

I’ve cried a lot writing this. If you feel angry at me, or inclined to judge me, please know you will never judge me as harshly or as sorrowfully as I judge myself. Never. I realise just how much I haven’t wanted to write any of this. But now I’ve done it, with hopes my words might change at least one person’s heart, prevent at least one animal’s hurt, and help wake the world to a truth we all know to be true on some level: that motherhood should never be a thing we exploit.