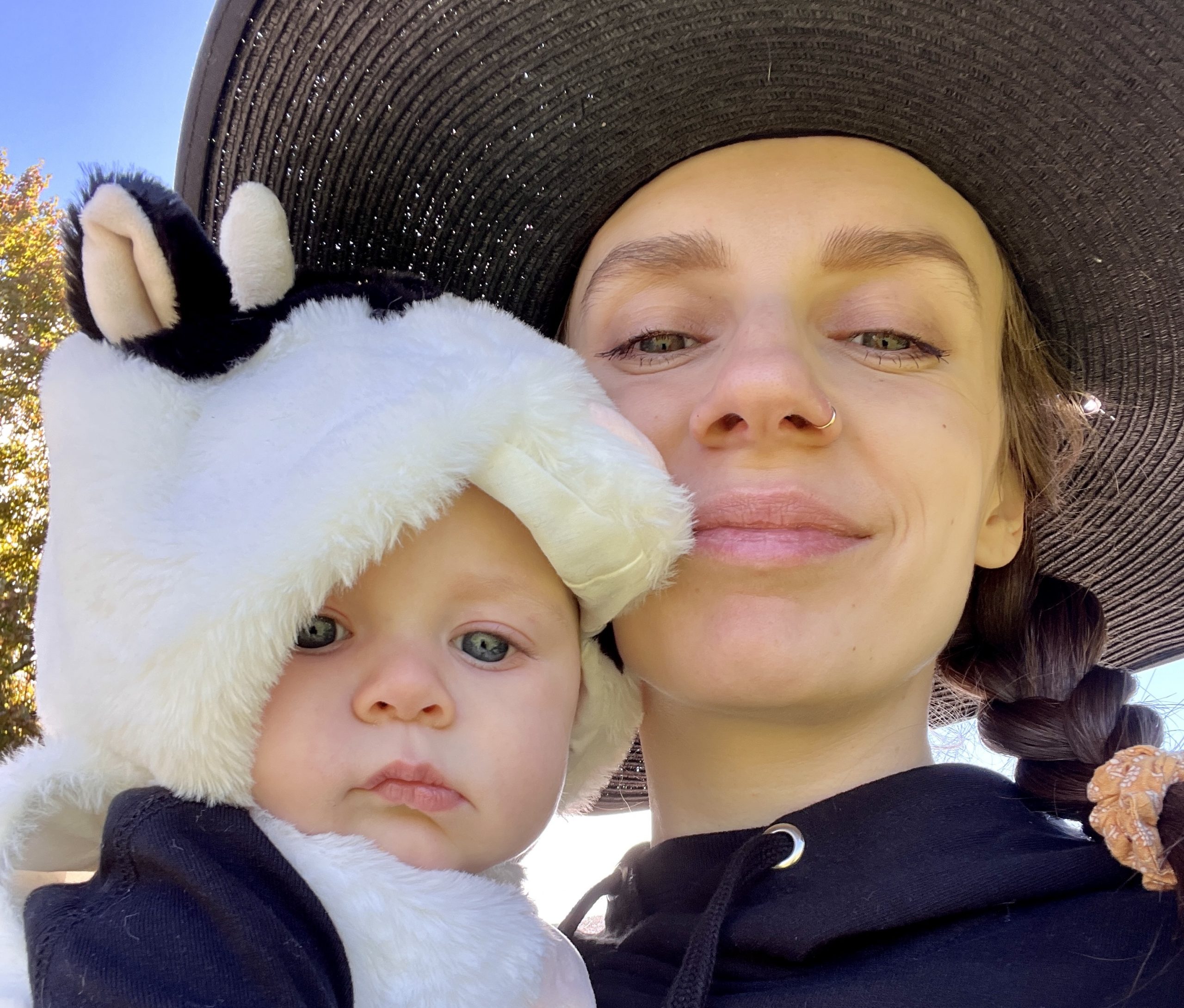 I went vegetarian as a teenager when I realized an individual who had a heartbeat, feelings, and friendships was lying dead on my plate. Then when I began college, my body started rejecting dairy products intensely. I have clear memories of being sick after having cheese on a sandwich or eating some sort of creamy dessert. I was shocked at how strongly my body was repulsed by dairy—it was then that I began to understand dairy was not meant to be consumed by humans, but my perspective was still limited to health and diet.

As I made the change to a plant-based diet and did more research, I began to wake up to the cruel truth that dairy is in fact scary. I learned that farmed mammals, like all mammals, must be pregnant to produce milk; they don’t just have milk spontaneously available in their bodies. I also learned that after carrying their babies to term for nine months (just like us human moms!) and experiencing labor, animal mothers exploited for dairy never see their babies again. If the babies are female, they’re taken from their mothers, raised separately so they can’t drink their milk, then, like their moms, are exploited for their milk as soon as they are old enough to be forcibly impregnated and begin lactating. If they are born male, their bodies are sold off for cheap meat and killed quickly.

I’ve now spent 15 years as a vegan, committing myself to animal activism, climate activism, and human rights. Professionally, I am the Marketing Director at Woodstock Farm Sanctuary: a nonprofit animal rights organization in New York that rescues farmed animals, connects people to animals to advance veganism, and advocates for animal rights in alliance with other social justice movements. My job invites people into a world that rallies for equality and strives for a future rid of oppression, exploitation, and injustice for both humans and nonhumans alike. My daily goal is to inspire people to see farmed animals through a different lens—one that is kind, just, and humane.

While multiple species are used by the dairy industry, the most popular type of breastmilk to consume in our society comes from cows. Woodstock Farm Sanctuary has eight cows rescued from the dairy industry and currently has a campaign called Meet Jo, inspired by Jo the cow who was liberated from a small-scale dairy farm in upstate New York in early 2020. Her story, while unforgettable, is not unique—nearly 10 million cows are currently being used for their breast milk in the United States alone. And while many people are switching to plant-based alternatives and becoming more receptive to the truth, dairy is still celebrated and normalized in many horrifying ways.

One insidious way the industry  pushes pro-dairy propaganda is at The Birthing Center at the New York State Fair. Every year, hundreds gather in a tent to watch pregnant cows go into labor—that’s right, people actually sit and watch a cow who is in labor give birth. As mothers, we empathize with all birthing stories. Birth is a sacred, vulnerable experience for any individual, including nonhuman animals. Imagine, in the difficult throes of labor, being forcibly transported in a loud, hot vehicle, pushed onto a bright, noisy stage and made to give birth in front of hundreds of strangers, only to have your baby taken away forever moments later. Every year this pitiful spectacle plays out at the New York State Fair, and the team at Woodstock Farm Sanctuary is determined to put an end to it.

If you’d like to support this initiative, please sign the petition to end The Birthing Center at the New York State Fair—dairy cows are mothers too, and they deserve so much better. To learn more about this petition and why it’s important, please check out this post I made on Woodstock Sanctuary’s Instagram.

While I never expected to build a career in animal activism, I truly never anticipated welcoming a child into this world. It was not in my plans—as someone who understands animal agriculture’s direct tie to the global climate disaster and is married to an environmentalist working in green energy, I’ve lived with a lot of daily anxiety about the near-term fate of our planet. However, when my husband and I discovered we were pregnant, we knew we’d been given an opportunity to create a beautiful human who could help this world. My daughter will be raised in a vegan household and grow up with empathy for all beings and our planet. She will meet cows, sheep, and goats—some mothers, some who never got to know their mothers, some rescued alongside their mothers—and she will know and respect each one’s sentience, individuality, and existence.

My life without dairy seeded from a dietary perspective that bloomed into a significant part of my ethos. I can only hope that my professional work and personal passions inspire others to ditch dairy, boycott animal agriculture, and stand up for farmed animals. You’ll find me with my daughter in my arms, championing for a better world starting in my home and local community. Visit animal sanctuaries, not petting zoos. Switch out dairy for plant-based alternatives. Ask questions. Learn the truth. Try your best every day to reduce harm—for cows, for the future of our world, and most importantly, for your kids.

Lizz Truitt is the mother to Elara, the Marketing Director at Woodstock Farm Sanctuary, and when she has the time, a tarot reader. You can follow her on Instagram at @lizztruitt or find her at the Sanctuary cuddling cows.