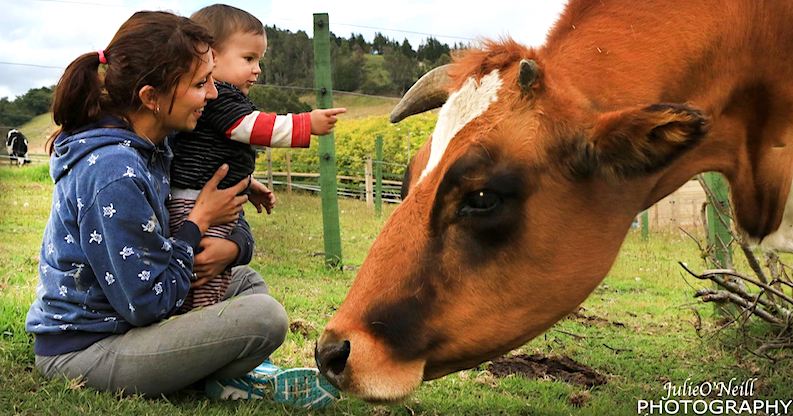 One of the many reasons I decided to birth my son at home was the fear that somebody might take him from me, even if just for a few seconds. I had a heightened sense of anxiety around the idea of being separated from my son; I could not bear the thought, and wanted him close to me at all times. I know now that part of my anxiety came from my experience rescuing cows in the dairy industry, whose babies are stolen from them at birth.

When I founded my animal sanctuary in Colombia years ago, our first property was very close to a large dairy farm. One day soon after we opened, a cow jumped the fence onto our land. She was pregnant, and immediately began to go into labor. I remember thinking it was almost as though she knew she would have to do this in order to save her baby, and secure his freedom. I rushed to assist her and after a few hours, her calf Balarama was born in my arms.

Shortly after the calf’s birth, the people from the dairy farm came to take the mother cow and baby back. Knowing their fate, I was beside myself, crying, pleading with the dairy farmer to let me keep them both. They would not allow this, but they let me keep the calf since he was a male and could not produce milk. I was so relieved to be able to rescue Balarama, but I was devastated for his mother, who cried and bellowed and called so mournfully as they forcibly led her away. Sobbing, I told her I was so, so sorry, and I promised her I would protect her boy forever. I carry her desperate, bewildered cries in my heart to this day.

In this way, I became an adoptive mother to Balarama.

Some years later, I gave birth to my own baby boy. Once he was born and I held him in my hands, I started to cry, but my tears of joy mixed with tears of grief recalling that day with Balarama’s mother, and knowing her heartbreak and confusion play out over and over, every day, in the lives of millions of cows exploited for dairy. Knowing they will suffer this loss year after year as they are reimpregnated and their children stolen from them with each successive birth, all so humans can consume the mother’s milk intended for calves. There is no glass of milk or piece of cheese in the world that is worth taking babies away from their mothers. There is no dairy product in the world that justifies exploiting motherhood at all.

Dairy Farming Went Against Everything I Believed In As a Mother